This is one of my favourites of the lot. The varying shades of teal green coming together in rough wavy patterns, all in a pear-shaped stone, were impossible to resist. Highly polished with beautiful banding reminiscent of stormy seas, this ocean wave jasper needed nothing more than a simple, coiled loop bail and oxidised sterling silver components. 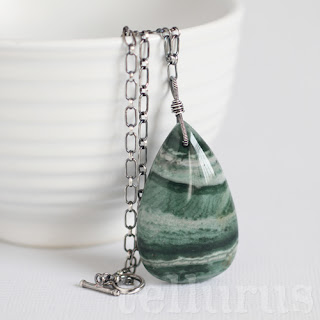 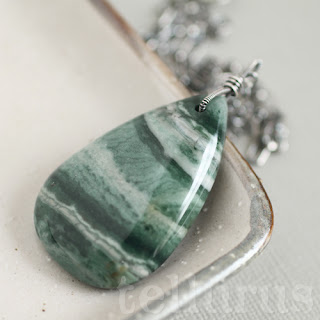 Ocean wave jasper, like its sister ocean jasper – and discovered not too long ago near the main ocean jasper mine in Madagascar – comes in a multitude of colours like white, brown, green, blue (rarest), pink and red. Not all together of course, usually in combination. For me, the easiest way to tell them apart is that the patterns on ocean wave jasper resemble, well, ocean waves, and the orbicular patterns on its sibling look like something you might see under a microscope. Apart from that, I guess it just a technicality depending on the part of the Madagascan coastline from whence they came.

Jasper in general is fine-grained, opaque quartz from the large family of chalcedonies. Then again, there are a whole range of jaspers that came about depending on the way silica minerals permeated the sedimentary base rock – the part my inner geologist finds most fascinating. Broad groups include the dendritic, brecciated, orbicular and scenic varieties, commonly given locality or descriptive names, each type and each specimen a testament to the diversity of nature.

The name “jasper” comes from old Anglo-French “jaspre” or spotted rock. These so-called spots or speckles usually come about as a result of geological processes on the base sediment: tectonic forces could produce fissures that break up the rock and allow different mineral solutions to seep through, while wind or ocean waves could produce gentle undulating patterns. Much like what we see on ocean wave jasper here 🙂 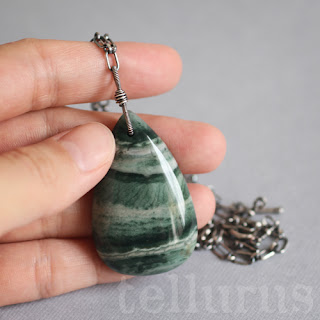 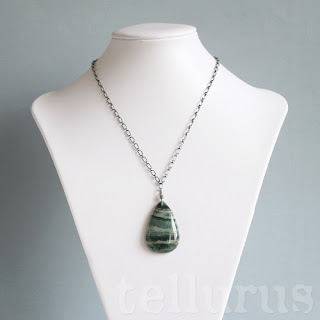 Jasper is known as the “supreme nurturer” and is said to bring calm in times of stress. Ocean wave jasper is apparently useful for balancing, healing and renewing, and has detoxifying properties.